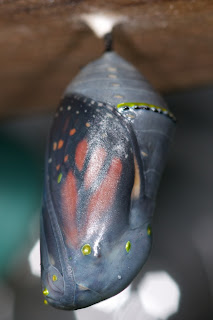 This butterfly is just a few hours away from coming out of her chrysalis. As you can see, the chrysalis has gone from being bright green to being almost transparent, and you can see the wings of the butterfly all curled up inside. 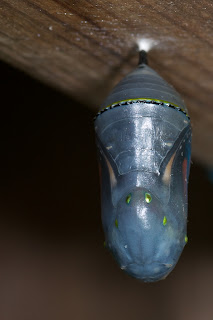 Here's another view, where you can see where the wings come together - this will be the butterfly's back. 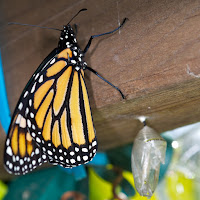 And here she is, a few hours after breaking out of the chrysalis (the technical word for this is "eclosing")!
When she broke her way out of the chrysalis, her wings were still all soft and wrinkled up. Over a few hours, she pumped fluid into a network of tiny tubes within the wings. Once the wings were pumped up, they hardened and became flat like you can see in the picture.

A few hours after this picture was taken, she flew away. Maybe she'll come back and visit Archie's Garden again!

(click on pictures to enlarge)
Posted by Archie at 8:50 PM No comments:

These wasps are called "paper wasps" because they create their nest out a paper-like substance. They make this paper by chewing up leaves and gnawing fiber from wood.

This particular species of paper wasp (Polistes fuscatus) is normally not aggressive towards people or other animals. In fact, the adults are vegetarians that live on fruit and nectar from flowers. They, like bees, are "pollinators," meaning that they gather pollen from flowers and help plants to produce fruit. So you might think that they'd be good to have around your garden.

A nest like the one in these pictures can kill large numbers of monarch caterpillars. For this reason, people who try to help the monarch butterflies will sometimes destroy wasp nests. You might think this is a bad idea -- after all, both paper wasps and monarch butterflies are native species, they have coexisted for thousands and thousands of years, and the wasps serve important functions in the ecosystem. There is some justification for reducing the number of wasps, however. Because people have changed the environment where these insects live, we have shifted the balance between the two species. Wasps can flourish in areas where people live: the exposed wood from houses and other structures provide them with easily used material for building nests (and places to build them), and gardens provide abundant fruit and flowers for the wasps to feed on. Unfortunately, people have had the opposite effect on the environment needed by monarch butterflies -- open fields have been turned into farms or cities, and there is less of the milkweed plant that the butterflies need to survive.

It is a risky thing to try to manipulate the balance of nature, because so many things are connected in ways that we don't always understand. By living where we do, we are already interfering with the natural equilibrium.

For what it's worth, in Archie's Garden we're working on making it difficult for the wasps to get to the caterpillars. We'll be building a screened-in area where we can move milkweed plants.
Posted by Archie at 8:08 PM No comments:

When a caterpillar is ready to shed, it will often wander a short distance from the milkweed plant, and just sit there for a day. You may think it's dead, but it's not. Be careful not to disturb it -- even though it's not moving, it's alive!
After the caterpillar has shed its skin four times (when it's called a "fifth instar"), it keeps growing until it's ready to pupate. It will probably crawl off somewhere, and then sit still, just like the other times when it sheds its skin.

But the fifth instar does something different. After sitting still for a day or so, it will emit some sticky stuff, and glue its back legs onto whatever it was sitting on. Then, it will let go with its other legs, and hang upside down in a "J" shape.

As it hangs, it will gradually bunch up, and get shorter and fatter, until it sheds its skin one last time -- but now, instead of coming out from its skin as a larger caterpillar, it comes out as a pupa!

The pupa is this smooth, green capsule. It has a few shiny dots on it, and if you look carefully, you can see the tracings of what look like a butterfly wing inside. We'll watch carefully over the next ten or so days, and see what happens with this pupa!
Posted by Archie at 5:35 PM No comments: