We've been having typical Southern California winter weather: within a single week, we will have nights where it freezes, nights with heavy fog, and days ranging from 50 degrees to 70 degrees days.

On sunny days, we'll have monarchs in Archie's Garden -- sunning themselves on the milkweed, nectaring on flowers, and laying eggs just like it was summer. We have a lot of caterpillars! The milkweed doesn't seem to be able to grow fast enough to keep up with them. 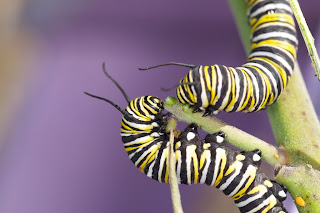 Most of the caterpillars seem to be surviving even the freezing temperatures. In the early morning, before the sun warms them up, they can be found in strange positions on leaves, or even fallen down onto the pavement. Although they appear dead, they start behaving normally when the sun shines on them.
These two guys look like they're frozen, but they're just waiting to warm up, and then they'll go back to eating.

We are still having caterpillars pupate. During this cold weather, the pupae are taking much longer to become butterflies -- we had one emerge yesterday after being in the Butterfly Fort for several months! This also is related to the temperature, we think. The pupae that are in sunny areas become butterflies faster than the ones in the shade.