Archie-Inspired Art Gifted to the Garden! 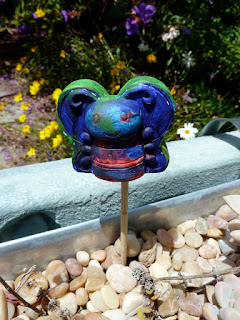 Just a quick post to thank our new friend Joseph for the cool and colorful garden stake he made for the garden. It's now installed in the succulent boxes on the back of our gazing bench, overlooking the milkweed patch. Joseph went home with some seeds, a milkweed plant, and a spare caterpillar (also named "Archie") and we hope we will hear some happy progress reports soon.

Joseph also just "Liked" Archie's Facebook page too, and posted some questions; you can do the same at www.facebook.com/ArchiesGarden.

Thanks again Joseph...and happy growing!
Posted by Archie at 1:23 PM No comments:

As Summer roars along, Archie's Butterfly Fort is full of activity. A few weeks ago, we noticed a lot of wasps in the area again, and, at the same time, some of our milkweed plants had monarch eggs and caterpillars.
The milkweed plants that were in pots got moved into the Butterfly Fort. We were surprised how many caterpillars were in there. The plants got eaten down to bare sticks, and the top of the tent filled up with J-ing caterpillars and chrysalids. Over the last week, we've been having several eclosures every day.
The garden has been full of fluttering things. Sometimes, three or four Monarchs will be patrolling at the same time, often chasing each other around. But they're not the only butterflies. Here are a few things we've seen lately:


When I was looking to take a picture of the Marine Blue, a small skipper landed on my finger. It was vibrating its wings very quickly. Another skipper noticed the one sitting on my finger, and zoomed back and forth in a frantic aerobatic dance. I had my camera taking pictures at its fastest speed (almost five pictures per second), but the skipper was much to fast. Here is just over one second's worth of pictures:


Last, but not least, here's a picture that I call The Battle of the Budlea (that's the name of the purple flower). It wasn't really a battle, since there's plenty of flowers to go around, but the way the picture turned out, it looked to me like the bee was being chased away by the butterfly.


(As always, you can click on the pictures to make them bigger)
Posted by Archie at 10:47 PM No comments: