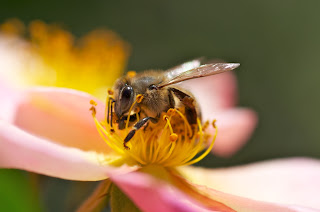 This honey bee is having fun playing with its food. The roses are always popular with the bees, although the sweet peas are also a favorite. 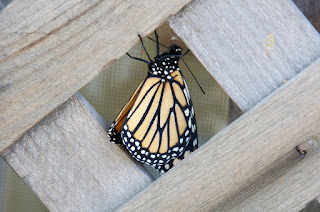 This monarch pupated on the back of this lattice. There was some very cold weather before she emerged, and then she emerged around twilight. The night was pretty cold, and the next day, she crawled around on the lattice for a while before we moved her out to some milkweed. She took it very slowly, only fluttering off after many hours. 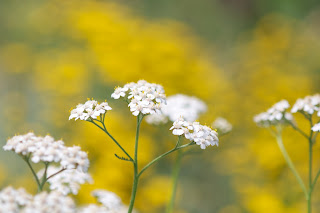 This white cluster of flowers is Yarrow (Achillea), and it also is popular among the bees. 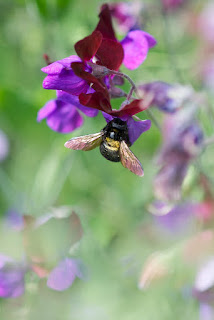 This big character is a carpenter bee. It may look like a bumble bee, but it's a different kind of large bee. It sounds like a small helicopter when flying by. We have seen people frightened by them when they visit Archie's Garden, probably because these carpenter bees are so big and loud. There's no reason to be afraid, though, because they're friendly, and very rarely sting people. 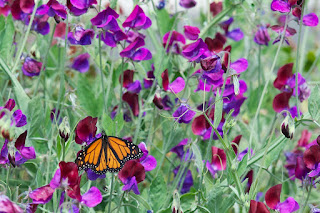 Bees aren't the only ones who like sweet peas! This Archie is taking a rest between patrolling expeditions around the garden.

As you can see in the picture on the right, this Airabella has been though some rough times. Her left wing has been battered, and there's even a hole right though it. She was still managing to fly around, though, and was laying eggs on the milkweed!
Posted by Archie at 4:33 PM No comments: